Warning: Creating default object from empty value in /home/customer/www/nannease.com/public_html/wp-content/themes/salient/nectar/redux-framework/ReduxCore/inc/class.redux_filesystem.php on line 29
 The A - Nannease
0
was successfully added to your cart.

“During my time as a nanny, I felt a myriad of emotions, including:
-Stress: I have a newfound respect for my mother after being responsible for children.

-Frustratration: School pickups should not involve chasing.
-Confusion: “Why are you throwing baby carrots at one another?”

-Joy: Twins finishing each other’s sentences and unknowingly acting in perfect synchronization will never not be wonderful to witness.

Shuttling three children from school pickup to after-school activities and back home, with reading, snack, and playground pit stops along the way, never failed to keep me on my toes. In the whirlwind of my time spent with primary school-aged identical twins and a cool older brother, however, one emotion stands out most: Pride.

During my senior year of college, I was a part-time nanny for a boy and two girls, one of which had been diagnosed with ADHD. Attention Deficit Hyperactivity Disorder makes it difficult for those diagnosed to focus on tasks such as school work. A child with this diagnosis may often struggle to regulate feelings of frustration and confusion, coming through in behaviors many people would label as “outbursts.” No child likes sitting for hours on end being lectured while the lure of running outdoors lies just outside classroom windows, but for a child with ADHD, these distractions and desires are even more challenging to ignore. This was the truth for one of my twin girls.

Upon accepting the position to watch over her daughters, the girls’ mother warned me that sometimes watching over a child with ADHD can be a handful and to be cognizant of her frustrations and energy fluctuations. This child’s parents made sure to limit screen time, provide healthy snacks, and encouraged the twins to balance their playground activity and their designated reading time while in my care. The girls’ parents did not view their daughter as different, but as a child whose energy knew larger bounds; an energy to be monitored to ensure her ultimate success; an energy that should also be expressed naturally just as any other child’s. I admired her parents. Their daughter’s diagnosis was not a dirty word, not a secret or shame, just one of her many traits. ADHD did not define nor undermined this bubbly little girl. 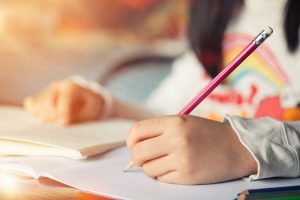 Driving through congested city streets, I learned more about the twins every week, including the one twin’s struggles in school and outside tutoring. Some days she would march up to me, far from talkative, ready to head straight to the car and ignoring her classmates. I learned from her siblings this behavior often meant she had had a bad day, that she had been reprimanded by a teacher or had not done as well as she had hoped on an assignment. Her frustration was palpable. My heart went out to her week after week, month after month- Her walk diligent as she entered math class, determined to learn; Her stare sincere as she sat in the back of my SUV, ignoring any distractions while knowing full well there was a playground just a few yards away. This little girl, despite her ongoing challenge with school, was determined to excel.

“I got an A! I got an A!” She came bounding out of her classroom one sunny day in April, her smile a stark contrast to the austere, dark brick-lined building we were in. Her twin sister trailed behind her, smiling as well. “I got an A on the quiz!” She continued to shout, pushing a piece of paper up to my face. There it was on top, a giant red A, circled and underlined. In my time watching over these girls, I think it was her first A. Her smile beamed across her face, a face that had shown many frowns in the past.

“An A?” I asked, allowing her to brag some more. “Let me see!” I looked the paper over while she nodded proudly. “That’s awesome!” I bent down to give her a high-five before catching up to her sister who was already high-tailing it to the car to put down her backpack and relax. We sat in the car (the weather had decided the playground was not an option today) and I listened to the twins excitedly discuss her grade. The girl’s joy filled the entire car, and soon I too had a smile that could not be fazed.

“And, and, my teacher, she told me it was one of the best grades in the class!” The girl continued to cheer to her siblings as we drove back into the city. Her twin echoed her success, validating that very few students in their class had received A’s, and even her teenaged brother smiled and celebrated, no matter how uncool it may be. While we had experienced car rides back home with boundless energy, this ride was entirely different. This was not just energy, this was joy, pure joy, on everyone’s part. I did not feel exhaustion or frustration with all this energy; I felt something entirely different. 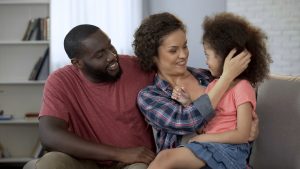 “Mom, mom!” The girl shrieked, dashing into the family room upon our arrival home. Her mother’s head whipped around, no doubt concerned about this dramatic entrance. “I got an A!”

Her mother’s eyes widened, her jaw dropped. “You did? Show me!” She pulled her into a tight hug. “Sweetie you did it!” My smile grew even larger seeing the family celebrate her accomplishment, an accomplishment so long overdue- One she had worked so hard for. Standing in their beautifully decorated living room, my arms weighed down with their backpacks, binders, and snack boxes, I watched as the little girl who tried so hard each week celebrated the pay off of her dedication; celebrated that no diagnosis or difference could hold her back.

In that moment, I was proud. Proud of her and her dedication, proud of her siblings for their joy and support, and proud of her family for working with her every step of the way so now they could celebrate with her too. These children could lead me on wild goose chases around a school lobby, they could toss miniature vegetables at each other all they wanted, and they could furiously knot my hair from behind the driver’s seat, but it could not erase my pride at this moment.”

Nanny N has he B.A. in Psychology and is currently in school for her Masters in Social Work. She loves to hike, try out new recipes, and her favorite “food” is iced coffee.